Over time our Lincoln Log collection has grown. My ancient set from when I was a child is ours. The set that my Granny used to have is now ours. We also bought a few of the cheap substitutes for the longer pieces from Clydsdale Cabin on Etsy (you do get what you pay for with him so quality isn’t super high, but for just having extra logs to build with his expansion sets are ok). We like to use the Lincoln log sets, as well as some wooden blocks and foam tile blocks to create castles and kingdoms for Katrina’s small action figures and dolls. The adventures never end.

Many times when we complete the castle, town, or building we take photos afterwards before the ‘Giant Hurricane Katrina’ knocks it down…

Below are a few photos of some of these creations. 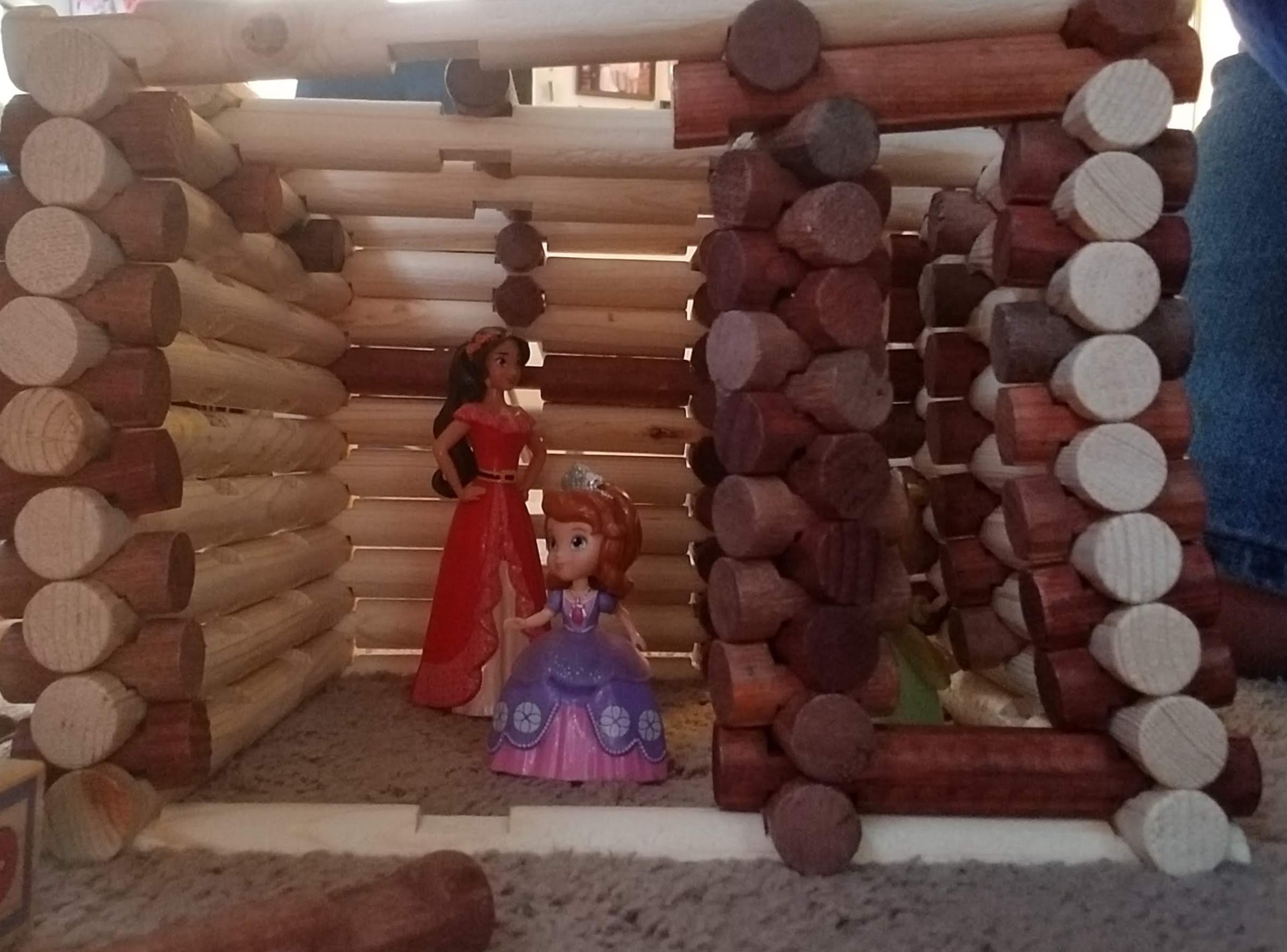 Photoed above are Elana and Sofia.  Creating cabins and castles tall enough to accommodate Elana’s height is sometimes tricky since things tend to get a bit wobbly once we get above her head height… but a lot of times we do try to create castles with at least one room big enough to allow for that sort of head room. 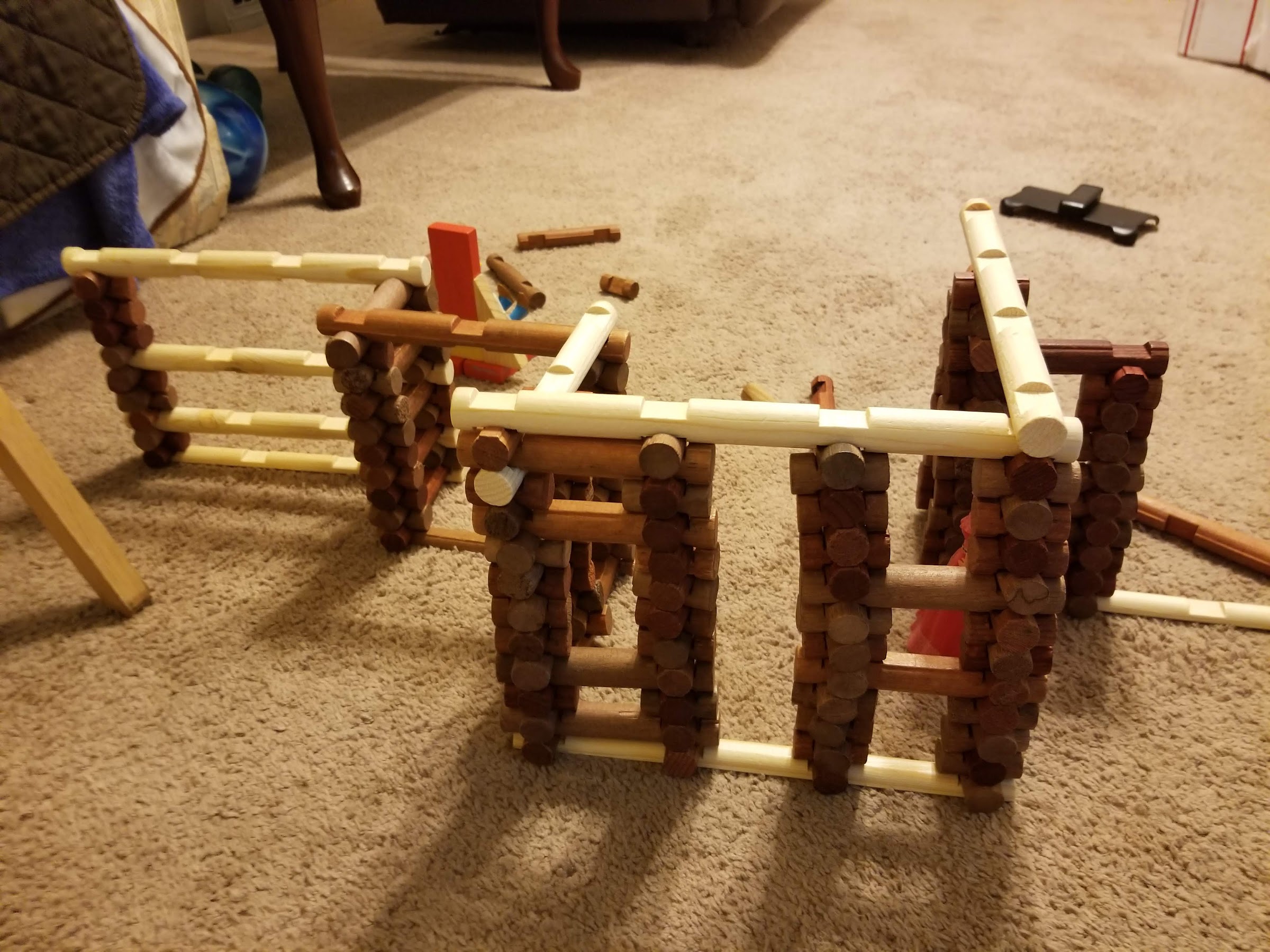 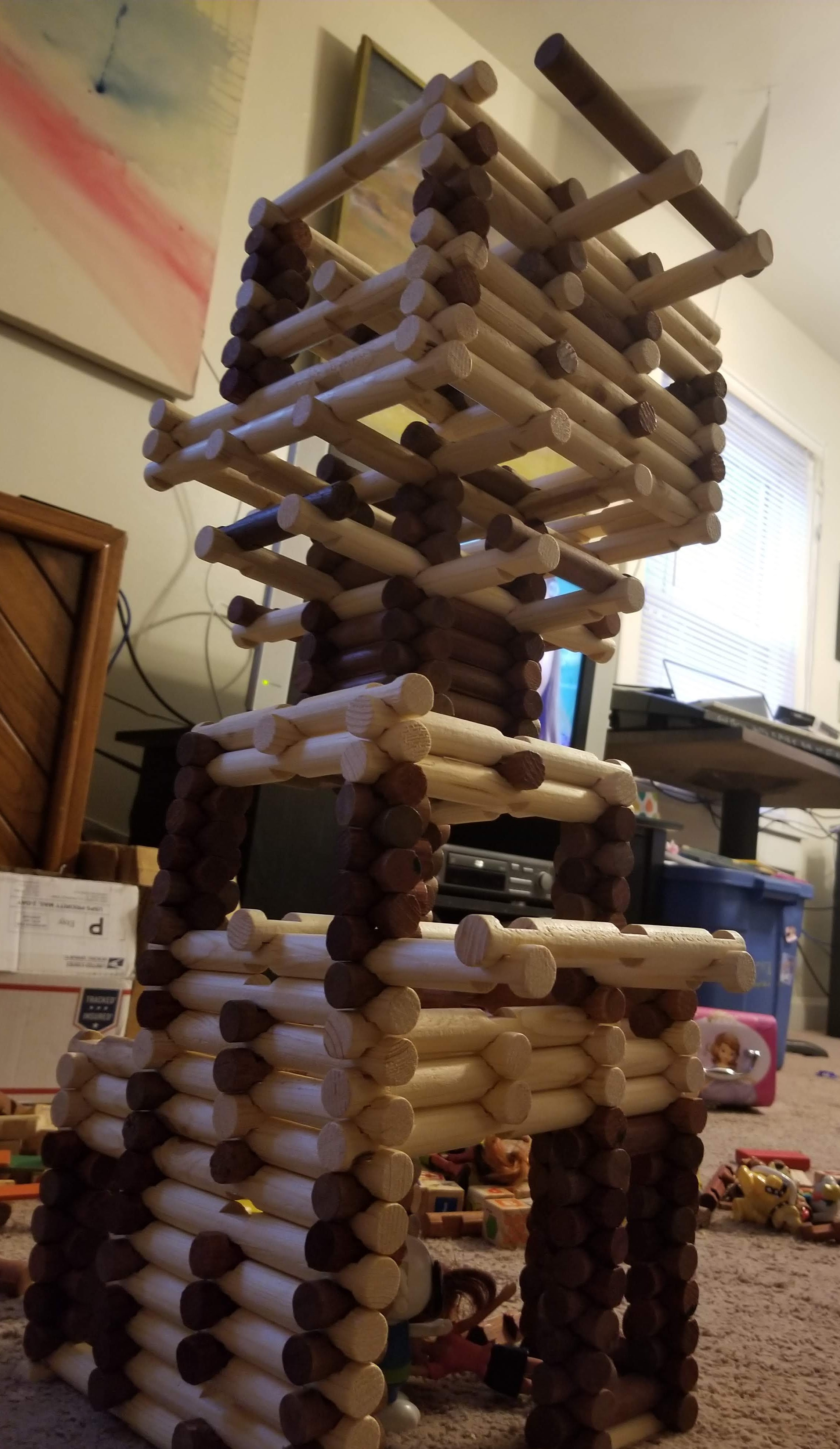 The building we created above took a while to put together. Most of the creations shown here actually do take a while, but the higher you go the more careful you have to be be… 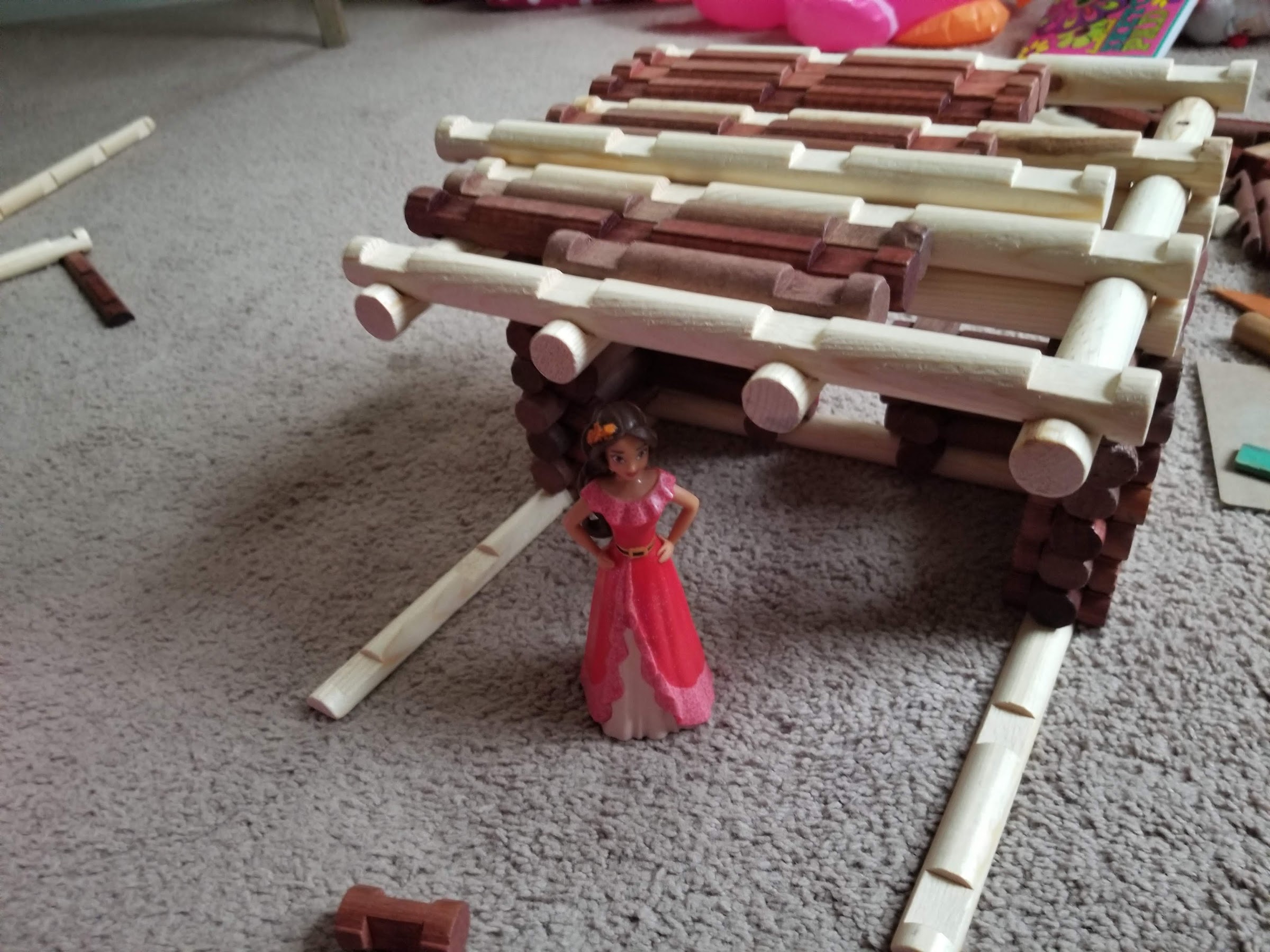 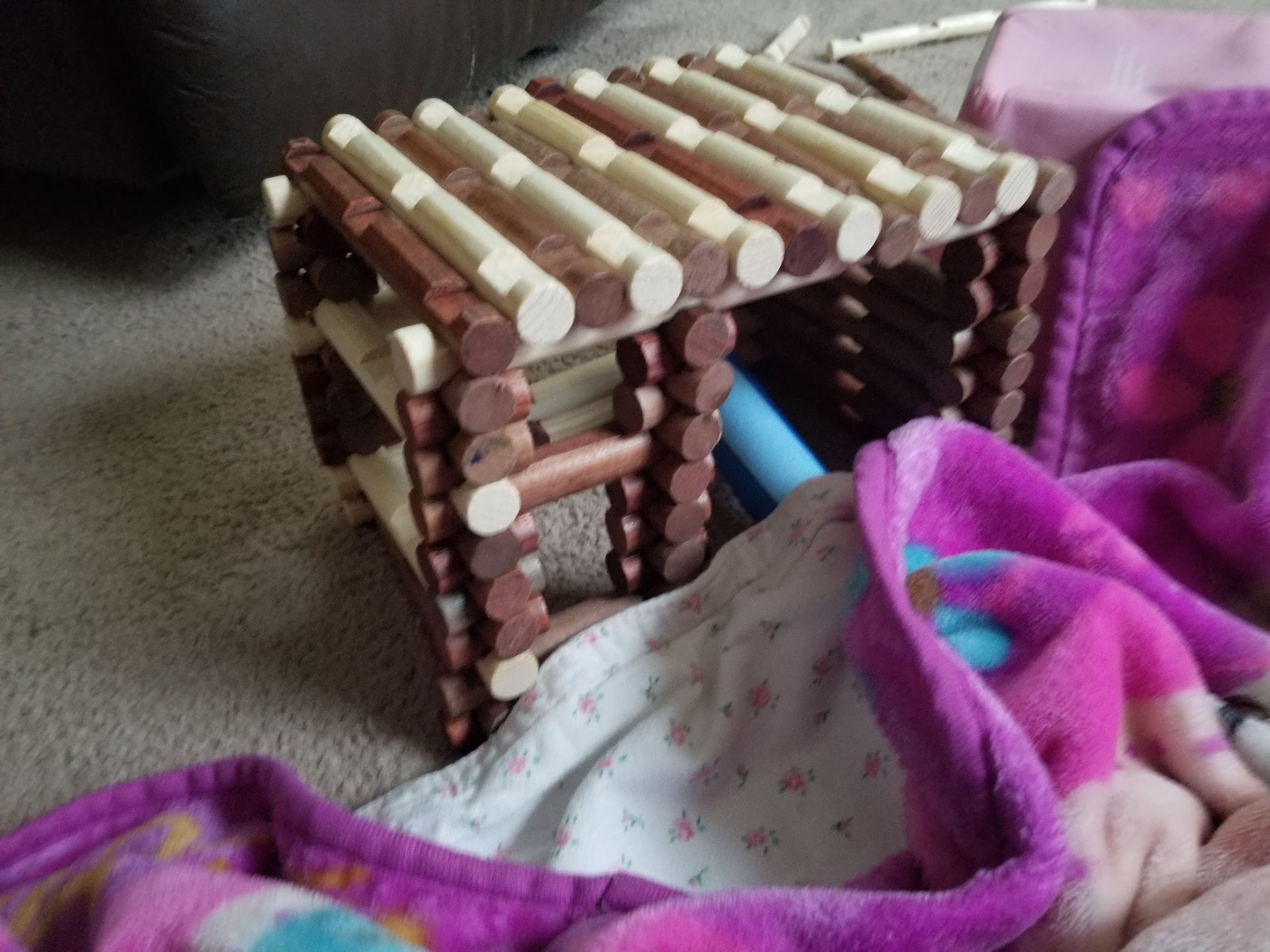 The above photo is one of the most pure and innocent photos from my daughter’s childhood that I will cherish.  The blue thing laying down in the cabin is her magic wand.  She put the covers on it to tuck it in for the night. 🙂

Usually when characters get involved in these creations she ends up putting them to bed eventually like this.  She even tucks in the bad guys from time to time. 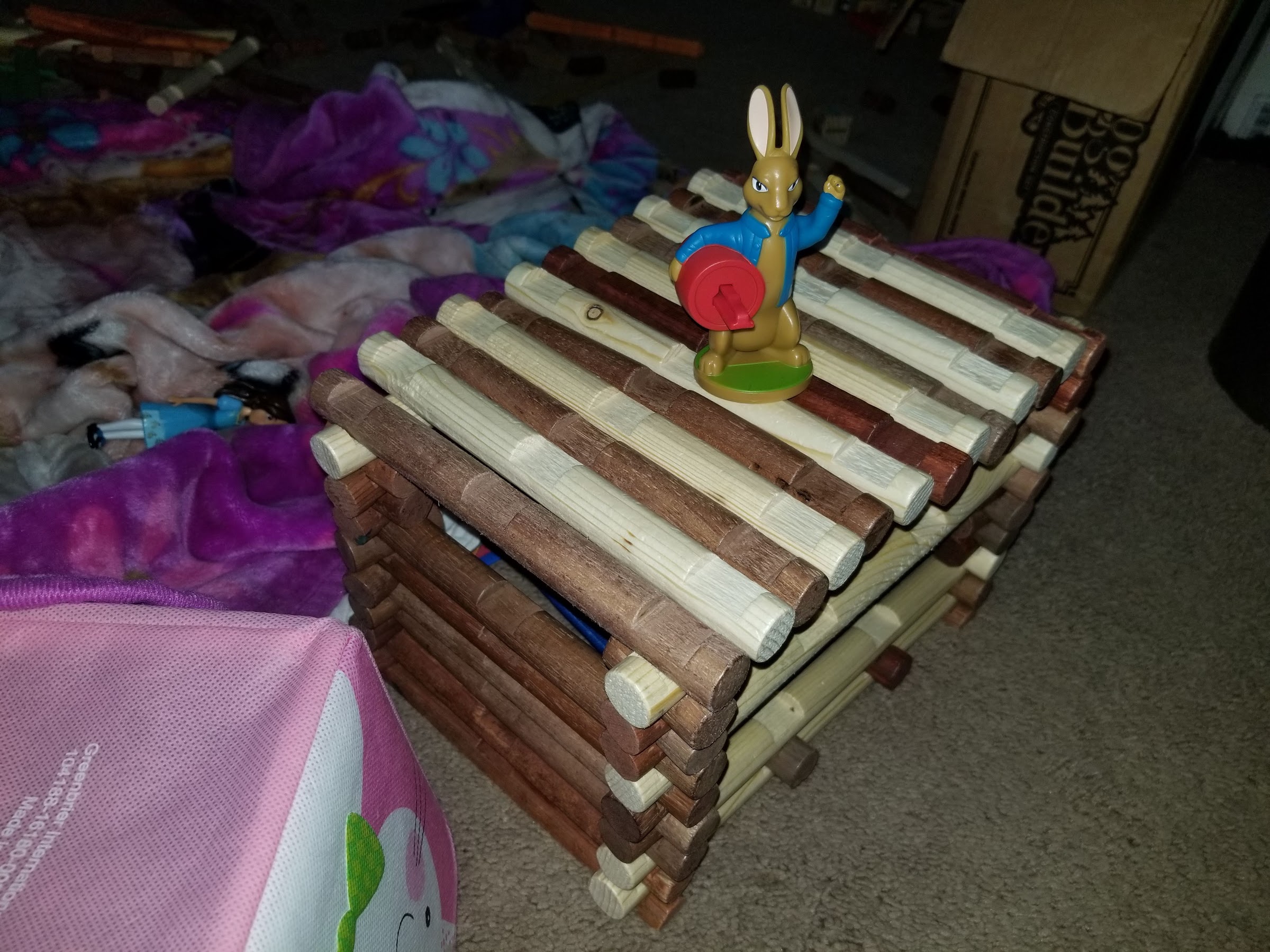 Peter Rabbit is a McDonald’s toy from when the movie came out. He fires a big carrot out of that spring loaded thing he holds.  For this reason he’s typically one of Elana’s head of Security. 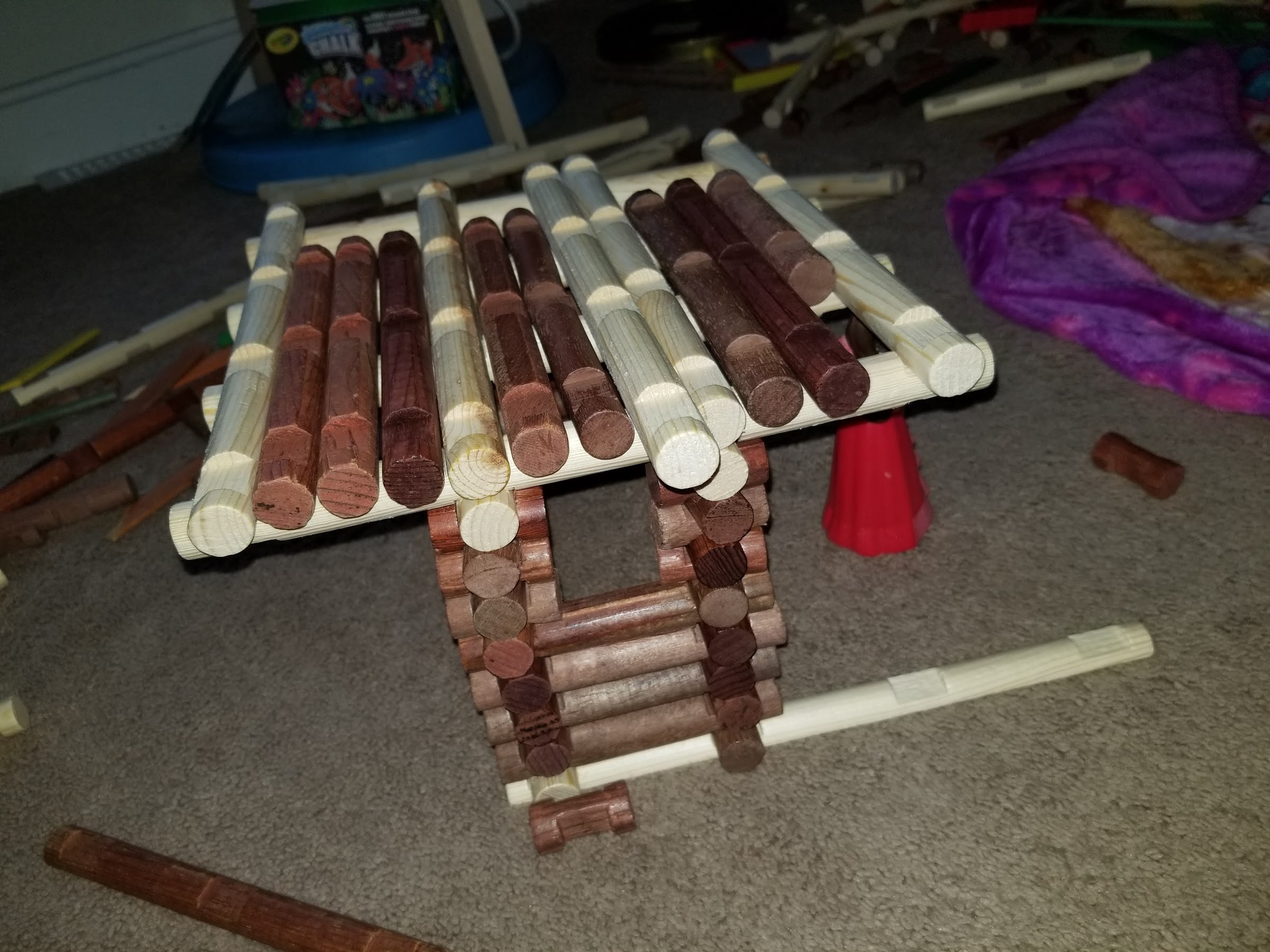 The Etsy purchased logs are a lighter color than the traditional set, so you can get some interesting patterns when you start combining the two sets.  I believe the Etsy stuff is just cheap pine, warps, cracks, and all, but it can still be fun to play with. 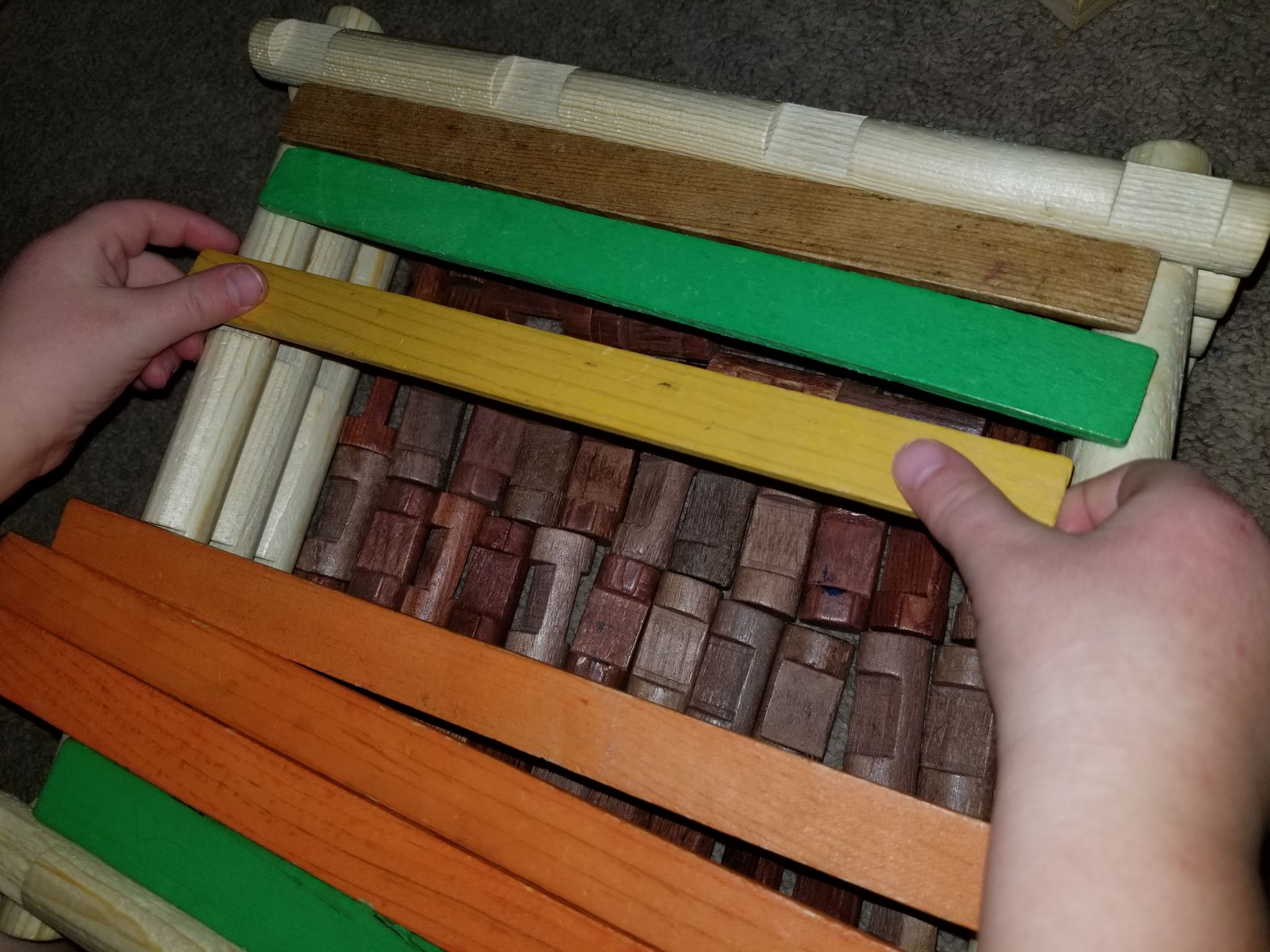 Katrina loves putting the one hole logs inside of buildings like the above photo shows. It’s interesting what patterns and conceptions she comes up with that are way outside of the box for her Daddy’s mind.   Her creative power astounds me daily. 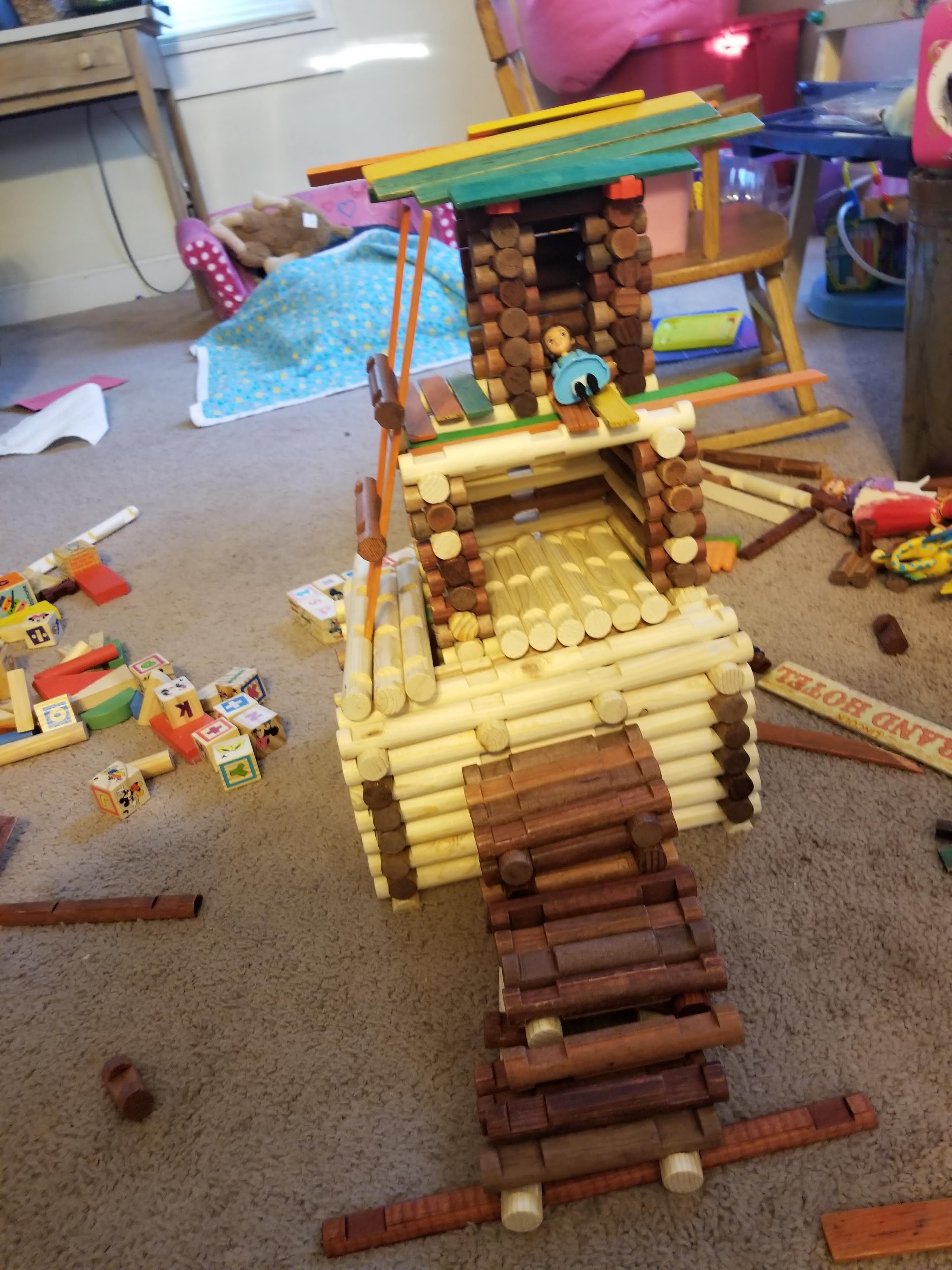 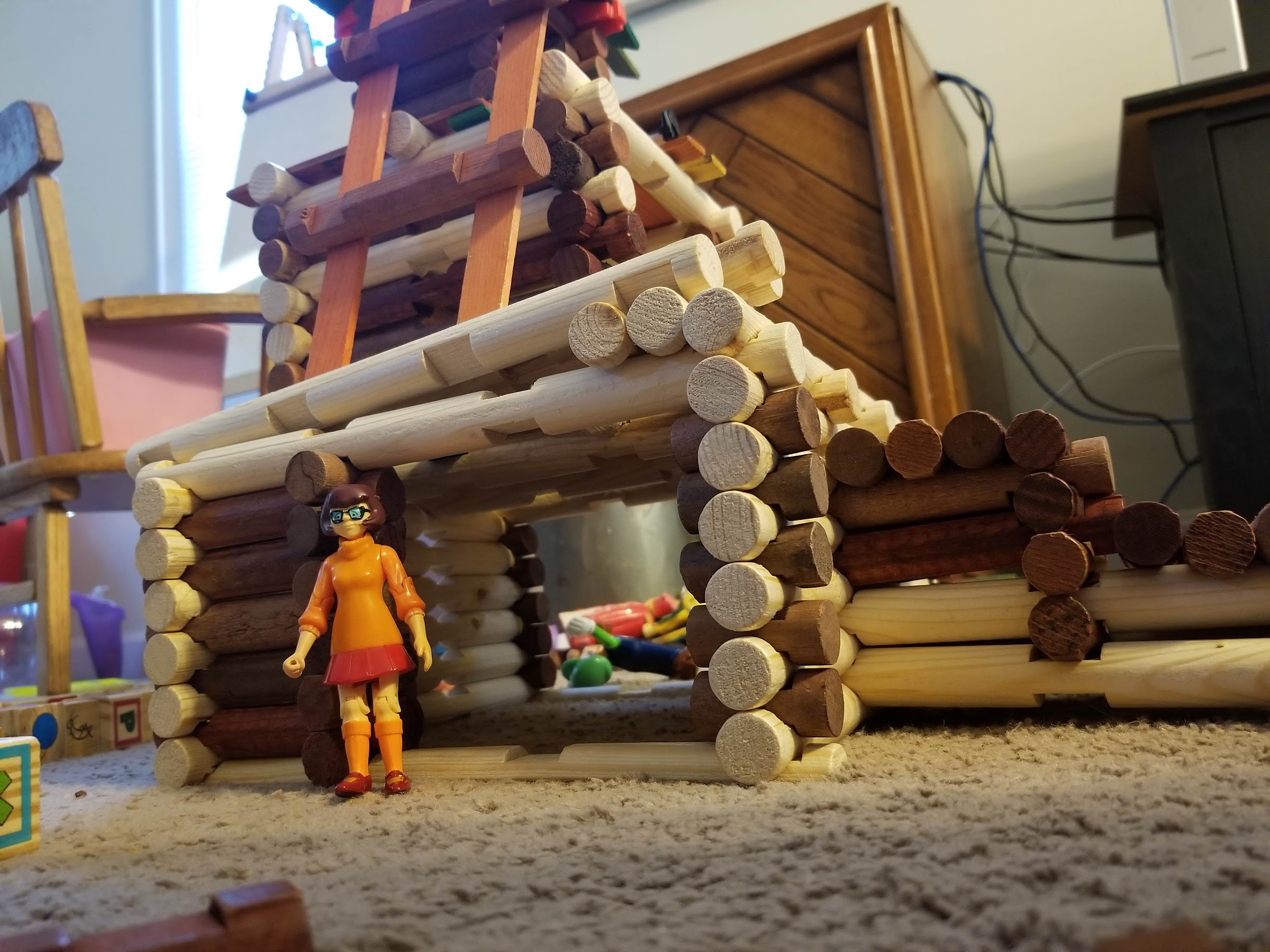 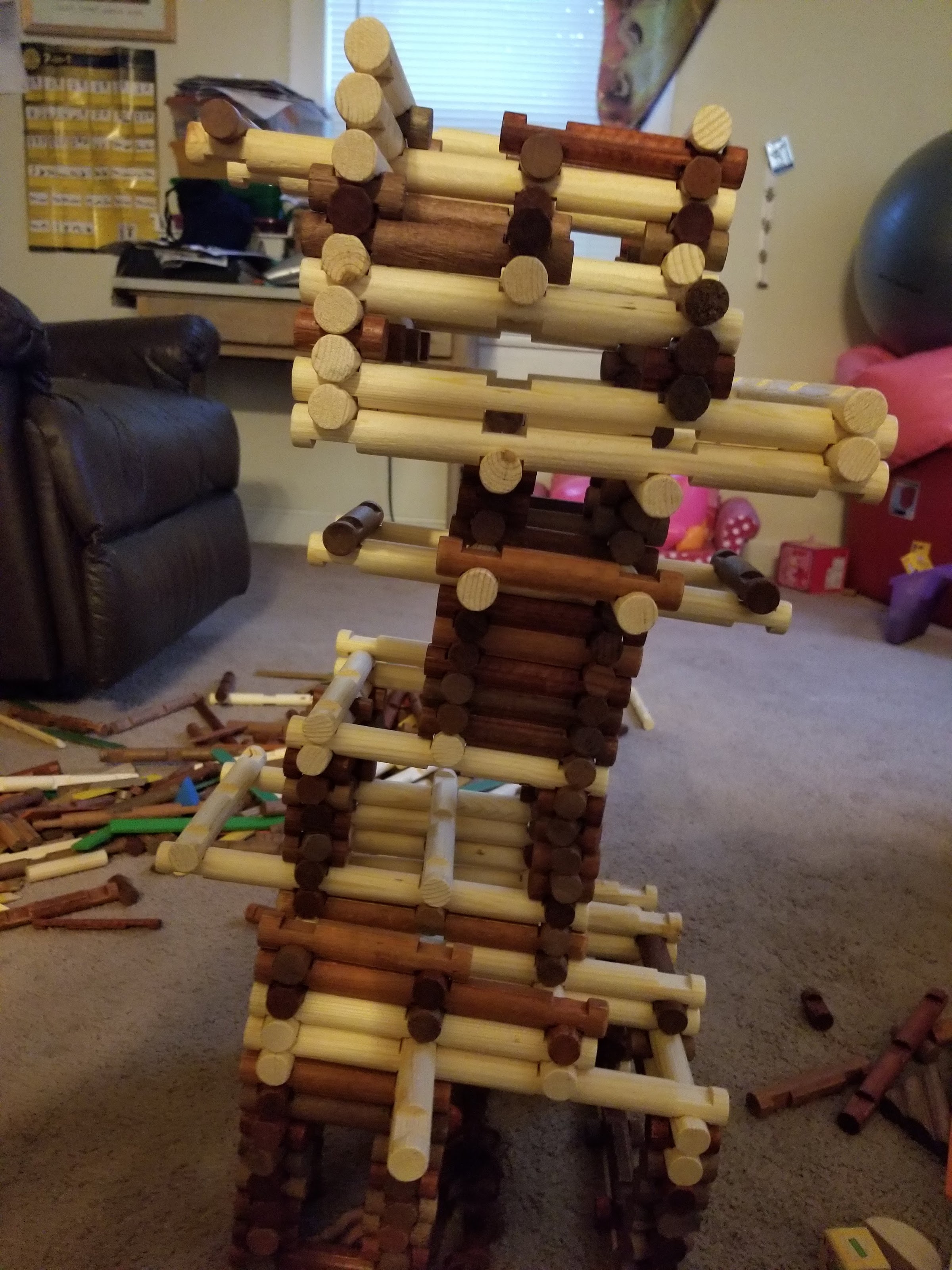 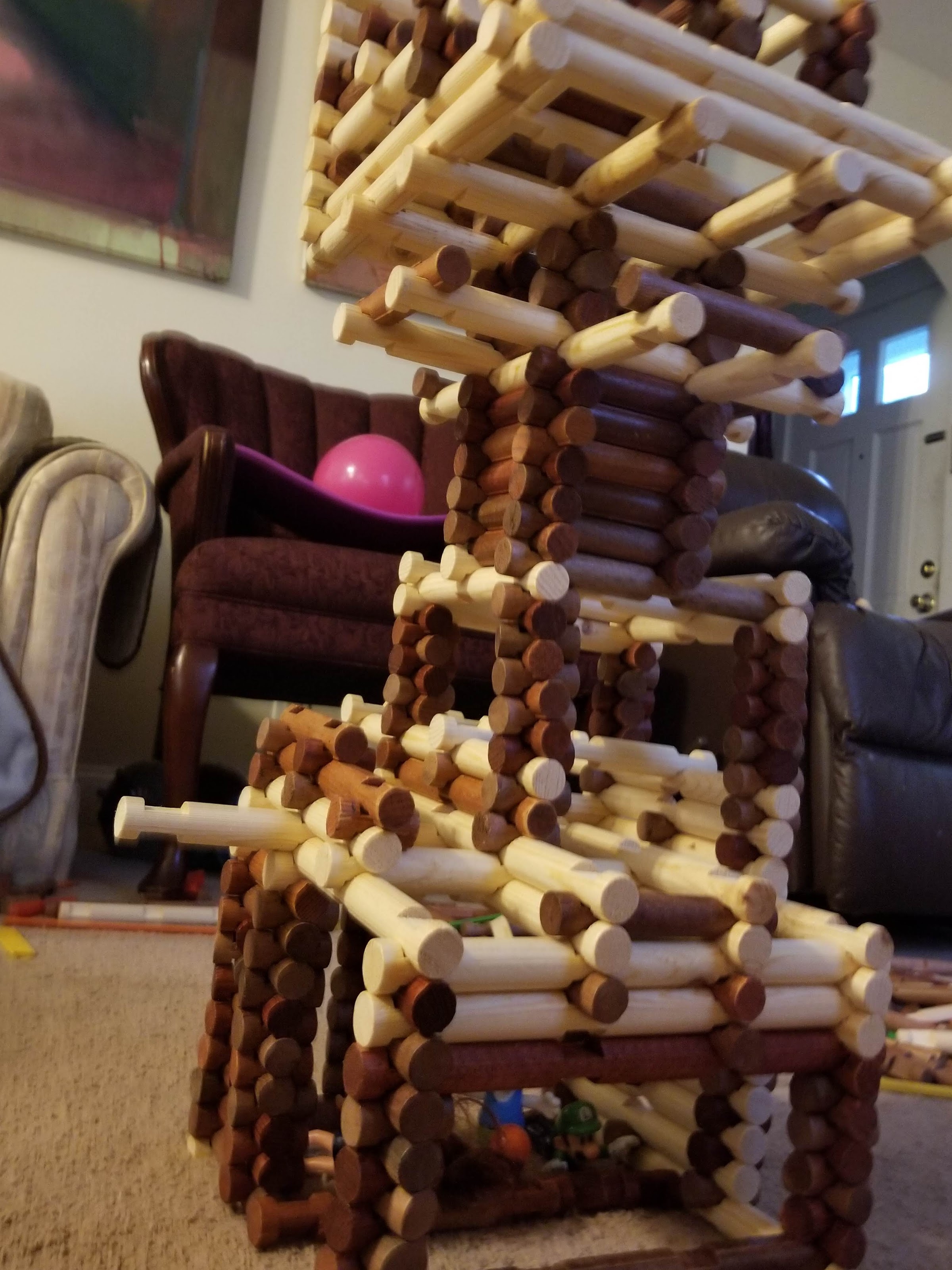 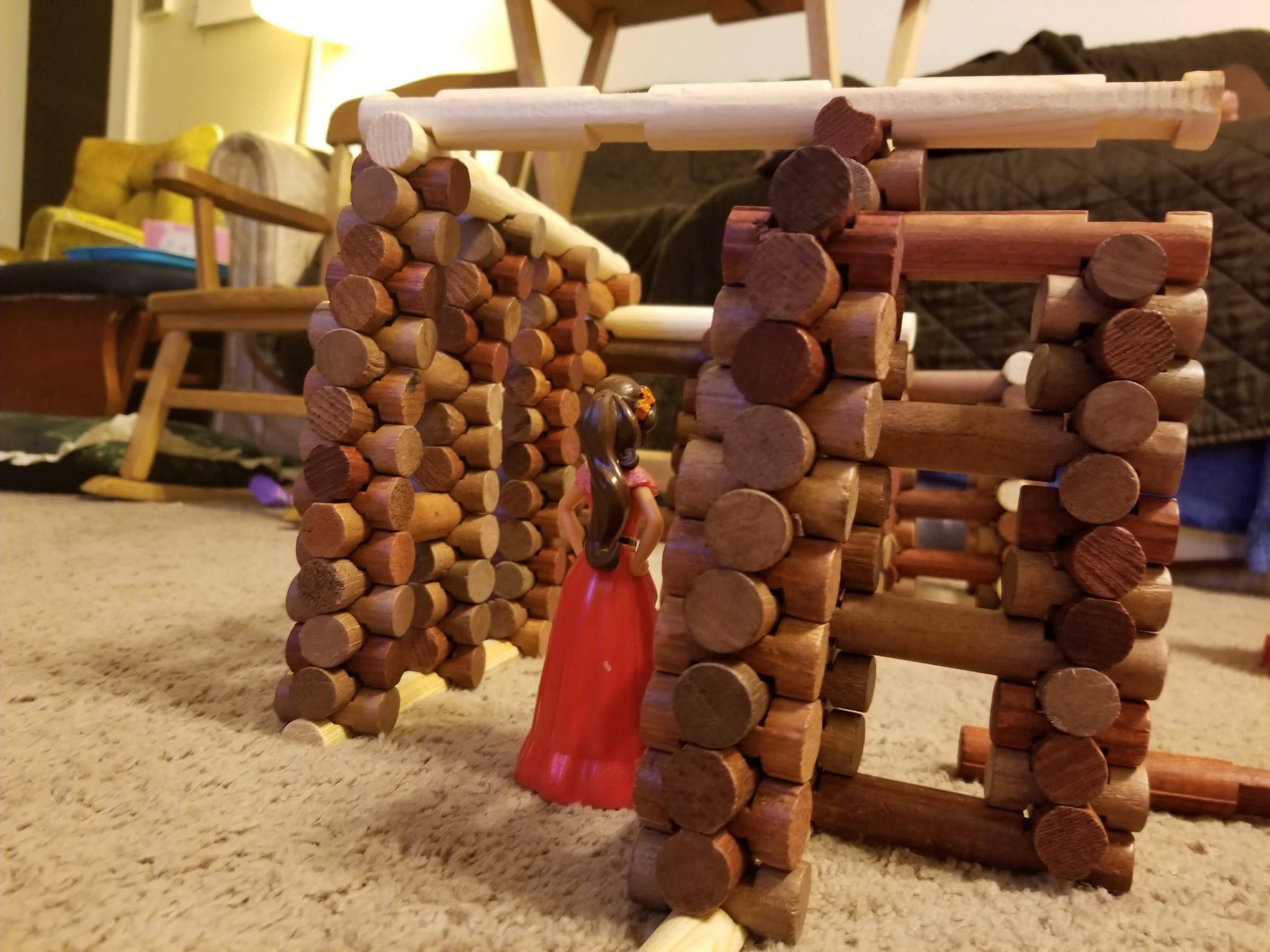 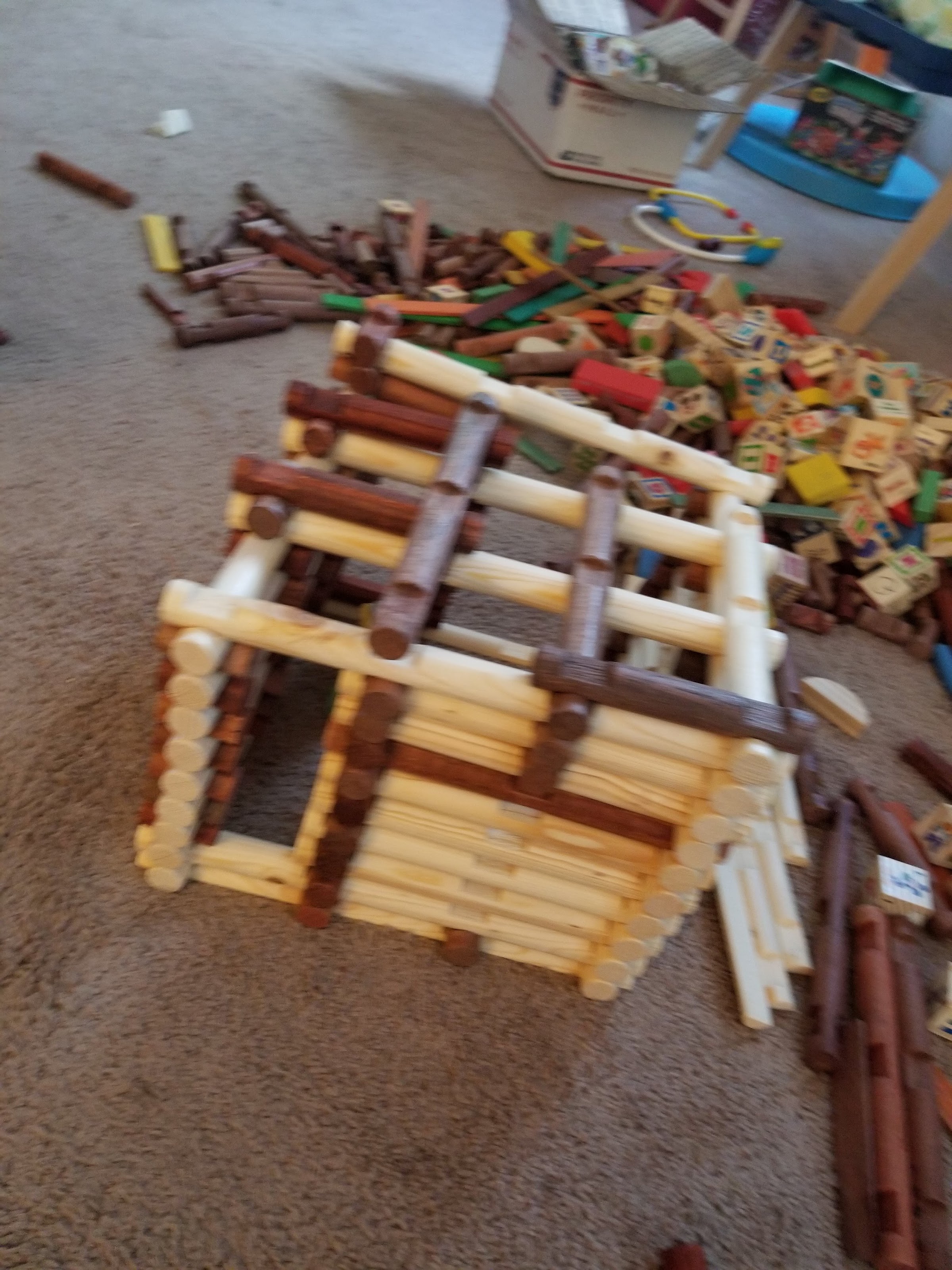 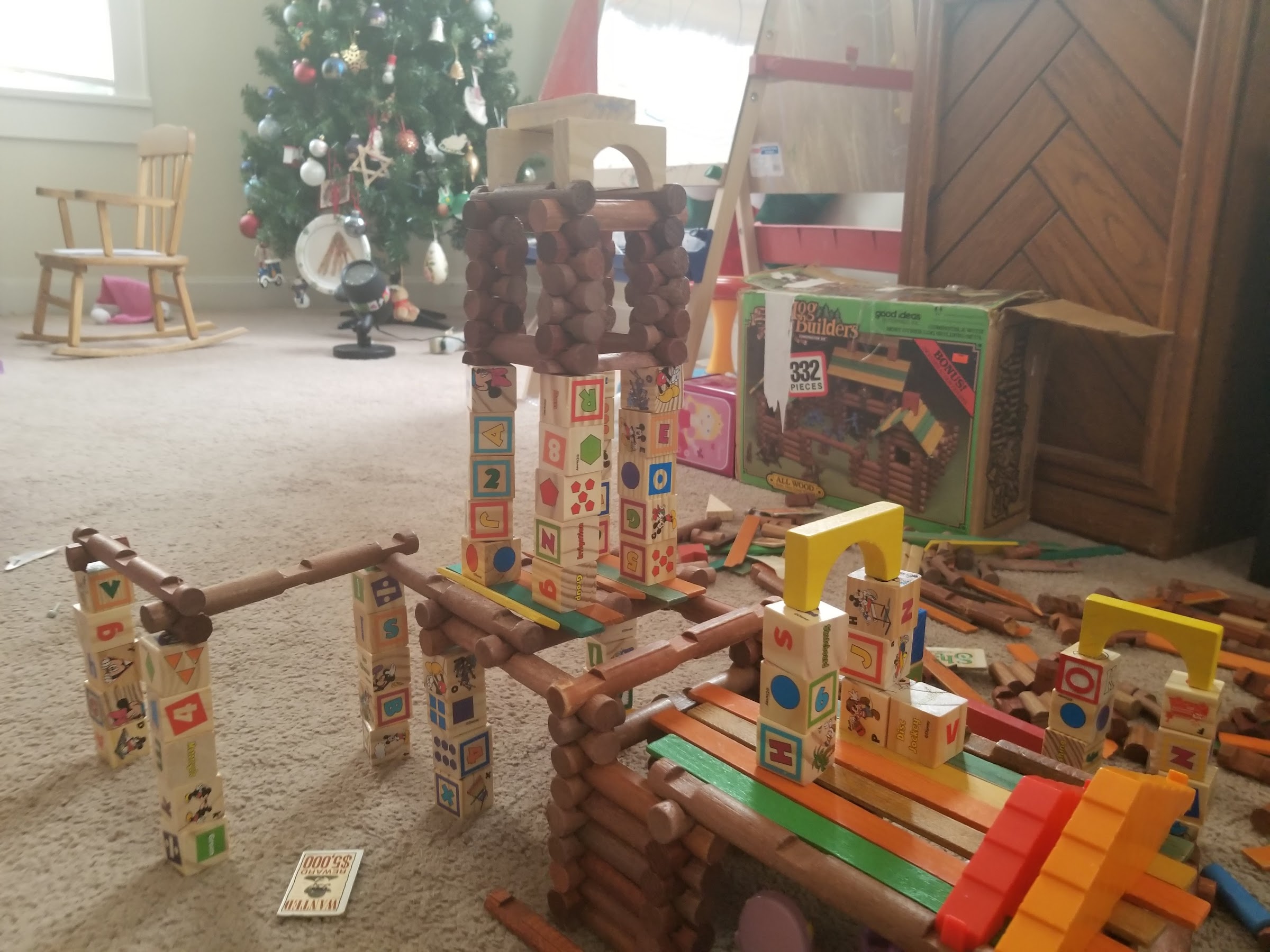 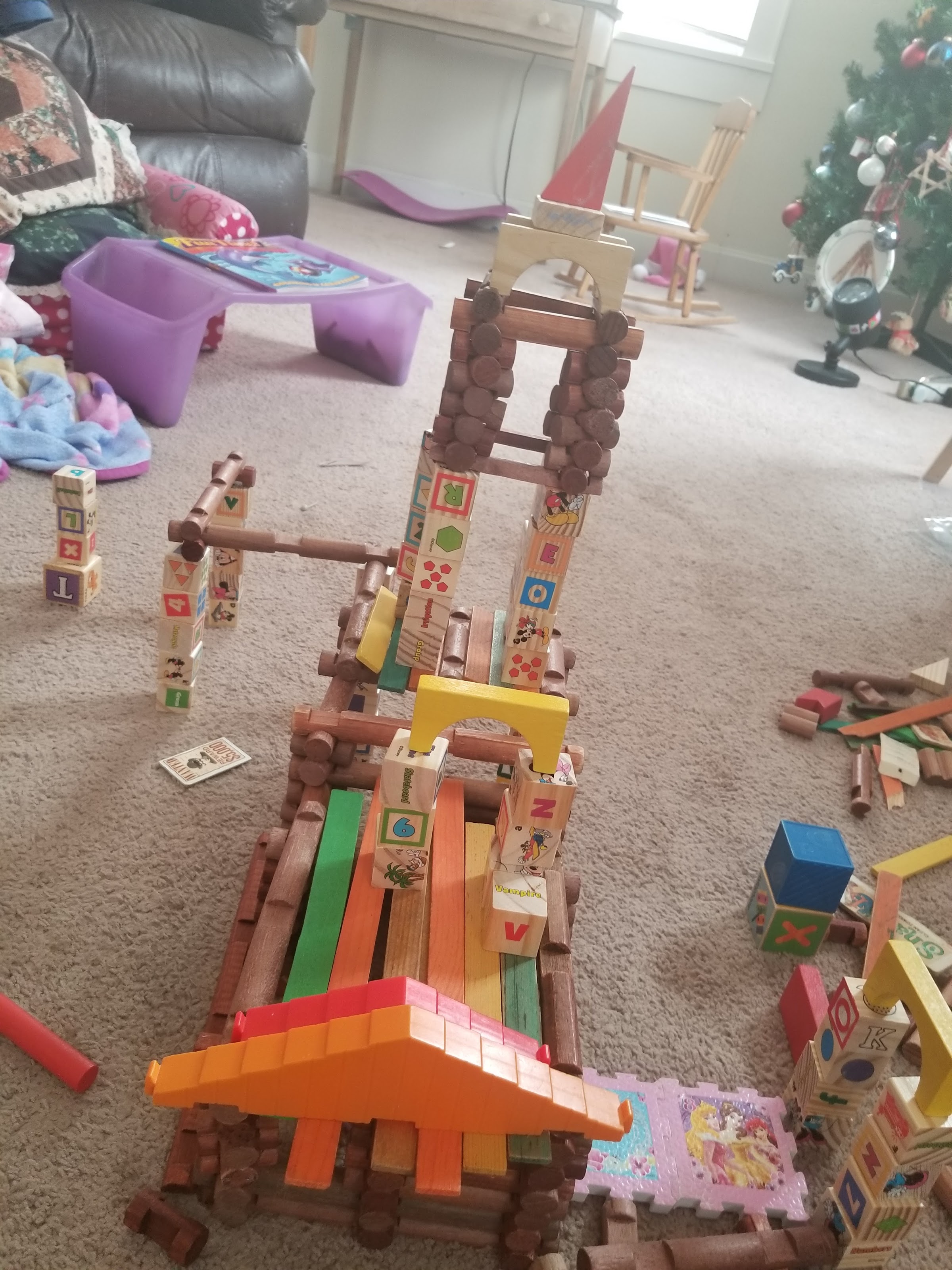 I love the Google Cardboard app and plan to start taking more panoramas with it over time.  Here’s a few. (I will probably add more in other posts in the future)

Above photo Panorama was taken at overpass near Overton, just outside of Boonville, Missouri.

Above photo was taken at Casey’s on corner of Main Street and I-70 in Boonville. I like the view from there.  I may post more photos from there over time.

Above photo was taken at Rolling Hills Park in Boonville, Missouri.

Above Panoramas were taken at Harley Park, in Boonville Missouri.

Above photo was taken in a building in Kansas City where the Train Expo took place a few months back.

Also, here’s a few non cardboard Panoramas from other sources either manually put together or automated with Google Photos or just playing around with the camera in different settings

Above panorama is from Toulan, a planet in Entropia Universe.

The above panorama is from Rocktropia, another Planet in Entropia Universe.

The above photo is another Panorama from Toulan, in Entropia Universe.

The above photo is yet another Toulan panorama.

The above panorama is from Entropia Universe too, but I cannot remember if this one was from Toulan or Arkadia.

Above Panoramas were from Gatlinburg, Tennessee, and were taken when Tekla and I were on our Honeymoon in 2005.

Above Panoramas were taken in Colorado, just off of I-70 when we were travelling many years ago to go see my Brother Danny when he lived in Las Vegas, and was stationed there with the Air Force.

I’ve created a new blog at http://healthyjeff.home.blog/  where I plan to track my fitness goals, ideas, tips, etc.

I’ve let myself become unhealthy Jeff far too long. Now I am going to make it my goal to be Healthy Jeff once and for all!…

It’s been a long while since I posted much here in this blog, so this is just a little bit of an update type of post on what’s been going on…

At work we’ve been in overtime mode since the beginning of the year.  That is hopefully going to slow down soon as some claim deadlines approach soon.  At least one week I worked 59 point something hours. I thought about doing that more since some weeks Management is allowing us to work 2 hours a day in addition to 8 required mandatory weekend hours, but the week I did that it was just cutting it too close since I was not able to always get to the Daycare in time to pick up Katrina… and it’s been so many weeks of overtime that I’ve decided that I’m doing the bare minimum to keep my sanity, and good attitude and humor.

Just now, before I posted this, I updated this blog to a new, more readable theme. I liked the old one, but the old school white text on black background was starting to make it too hard to read, and I was just kind of tired of it, so got this new one.  Hope you like it. 🙂

I have not been doing a lot of artwork lately, at least not directly. I do still do some doodling and snapshots with phone’s camera but not as much as I’d like to.  I’m also messing around with Google Photos a lot more lately.  I really like that they are back to allowing albums with more than 100 photos in them.  That got annoying quickly when you are used to making albums with thousands of photos.  I may start doing more messing around with artwork over time.

I hooked up the old Wacom tablet to the computer, and did a couple of small upgrades to the computer – we installed an ssd drive and upgraded the ram to double what it used to be.  Still not the best computer in the world, but it’s great for what we do, at least for now.

I have most of my color pencils next to the couch and do some little sketchbook work with those from time to time, especially when Katrina wants to draw with Daddy.  I have started following several groups in facebook related to drawing, painting, and creative arts, and am posting a few comments in there now and then. Trying to get inspired to start up doing that stuff myself, but we’ll see how it goes over time.

Katrina just enrolled for Kindergarten. Hard to believe that she’ll be starting that this year!  Her birthday puts her right at the cutoff for it, so it’ll be an interesting journey.

During the few minutes before my lunch breaks are over, or on weekends, or late nights when my body won’t let me sleep I’m still logging in to familysearch.org to pull in whatever updates it comes up with me for various documentation for members of our ever-growing family tree.  I’m slowly working on the blog over at https://thomannfamily.wordpress.com/.

In the generation list at https://thomannfamily.wordpress.com/zz-all-blog-post-summary-links/  I’m trying to work on documenting at least the first 10 generations (9 up from me, 10 if you count Katrina’s generation as generation 1)… It’s a slow process since I’m having to manually add in stuff on Tekla’s side of the family since the automated stuff I copied that main list in from didn’t include her side in depth.  I’m starting at Generation 10 and will slowly add in each generation and their children, and go down to generation 1.  I do have some of the lower generations already in there in bits and pieces.  What I’m doing is slowly adding in the information for each branch of the family from the 10th down to the first with a few important details highlighted… then over time I’ll add in a post for each as time permits over the years.  The main posts take a while to do since I do it the way I do, where I download the documents to Google Photos, then link to them from https://ctrlq.org/google/photos/.

As time allows, and I get resources, I’m also starting to digitize some old photo albums on Google Photos to add in to all the info on that blog… so that’s keeping me busy when I have spare time.

I have not played Entropia Universe a whole lot lately. I’ve been trying to make more of an effort to spend time with Tekla and Katrina when they are home instead of wasting time in that game.  Also, the most recent updates have kind of got me a bit frustrated with that game since the did a major overhaul of the entire camera system, that’s made managing estates a bit of a hassle, and made hunting a bit more difficult than it used to be in some ways.  Also, that game is just kind of boring, and a waste of time, money, and resources lately. It’s for several years had potential to be something more, but time will tell what happens with that.

At work, I finally got signed up with a 401K.  Getting involved in that has got me re-thinking how to allocate money, so we’ll see if I put any more money in to Entropia or find better ways to invest in our future…  At one point in time I considered Entropia deposits an interesting risky investment. Nowadays, it just seems like wasted money that could be spent on better forms of entertainment or other things.  Since Katrina won’t be spending as many hours at Daycare after this year, it may free up some cash that was going there to allow us to do more interesting things…

There’s rumor that someday I may get a Monday-Friday shift at work.  Currently I’m working Tuesday-Saturday when we aren’t in overtime mode doing this 6 day a week thing.  If that happens it’ll be nice to spend time with Tekla and Katrina on the weekends more, like it was in the earlier days when I was in training and did have Monday-Friday and Tekla did too… Tekla’s also looking in to getting a shift that’s closer to mine in when she has to be at work daily, so if that gets us more together time in the evenings, that’ll be nice.

Well, it’s now about 3:30 AM, and my stomach is starting to settle down a little bit, so I should probably go back to bed til 5…  (Honestly, I should do some Just Dance since I need to start exercising every morning again, but I’m going to allow myself some little rest this morning… Today’s the day that the Petro Mart that I fill my car up at most times starts not having fountain drinks available as they are remodeling, so hopefully that’ll give me some incentive to get off of the carbonated drinks and stay off of them)…