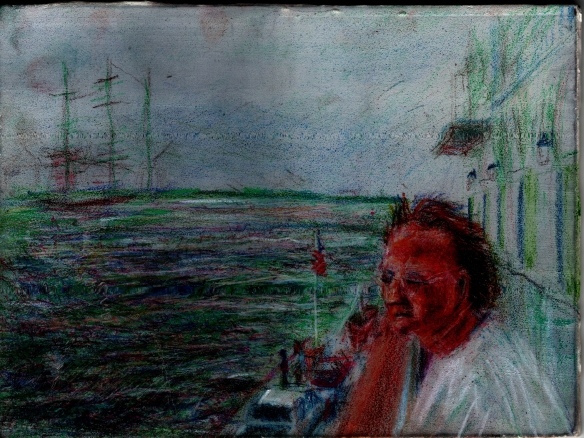 I still don’t think this image image is ‘done’ but it’s getting close to where I want it to be. I’ve reworked it many times. I’ve been technically working on it about 2 or 3 months, but most of that time I was just looking at it. Since I started The Artists Way again this week I’ve been working on it an hour or two every morning and night, every day.

I have no idea how many real working hours have been put in to it, but there’s been a lot. I’ll put multiple layers in, erase them out, scatch out highlights with a burnisher, add more color, erase out some with an electric eraser, add more color areas, rework, etc. The gesso in the foreground has probably lost most of it’s tooth, as has most of the ‘water’ area to the left, but I keep adding new marks to it all the time, so I may have another few hundred hours of work to put in to it before all is said and done?… I’ll probably move on to some other artwork for now so I don’t really overwork it beyond a point that I can’t fix it any further. The scan was taken without any fixative added. I hate how shiny color pencil glare causes an image to really get a lot darker looking in the scan then it is in reality. The image is based on a couple of photos that I’m putting together in to one image in the drawing. I’m trying to be careful to leave some of the white of the underlying gesso. Most of the cloud area is almost pure white from the gesso with very little color pencil. I probably need to rework the middle ground and the ship in the background a lot more, but maybe not since some atmospheric perspective isn’t necessarily a bad thing here.

I uploaded 98 photos of clouds in a zip file to Turbosquid that you can find at http://www.turbosquid.com/FullPreview/Index.cfm/ID/578229?referral=mastermesh

Here’s a small small slideshow preview of the images in the zip file.