The above link is an old electric meter box that I found in downtown Boonville, Missouri. The aged and weathered look of the paint on it caught my eye as did the contrast of the color of it vs the color of the nearby gutter shown in the image.

The above link is to a photo of an old side panel on a dumpster that I shot a year or two ago. The rust patterns are interesting and might work nicely as a texture map or bump map in a 3d modelling software if cropped to meet your need. Alpha may need to be adjusted so that its not so dark though.

This is an old stop sign that I found in downtown Boonville, Missouri. This old bent sign sitting at this location seems to tell a story. I like the composition here and the contrast between the bricks, the sky, and the red of the sign vs the pole texture. There is a lot going on texture wise.

This is the backside of a dumpster that has been worn down over time. It looks like the patterns on where the paint has been removed has happened due to rubbing against the collection truck as it is emptied. I find the swirly patterns to be rather interesting.

This is a photo of some rusted metal. Notice how it contrasts the plastic texture.

Above is a link to a photo I took a while back of a floor grid pattern that is typical of industrial construction factory type locations, stairwells, etc.

The above link is to a photo that I shot of some rusted metal that has some patterns on it where the rain has worn it down over the years.

Above is a link to this image of rusted and peeling metal on Turbosquid. Since I’m not able to do much the next few days in the ways of physical activity, it’s back to trying to upload stuff to Turbosquid as my hobby for now. 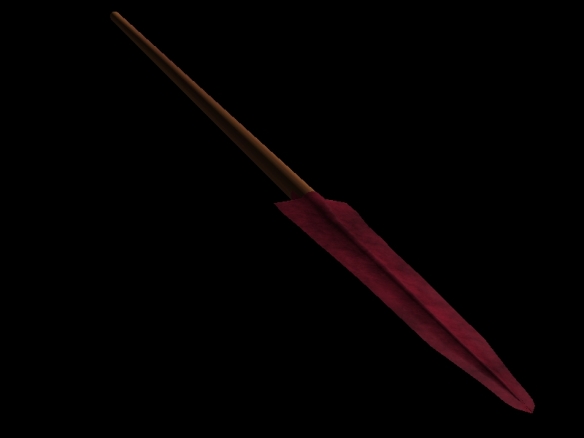 This is a 3d model I created tonight for the speed model challenge over at http://forums.cgsociety.org/showthread.php?f=122&t=984188.

The Model took me approximately an hour and a half to create, but I was a bit distracted since we were watching America’s Got Talent at the same time, and I was also using an internet browser to look at various spear reference images at the same time. I was originally intending to base this on the Hofburg Spear of Destiny that supposedly the spear that pierced the side of Christ according to some, but decided that since I was on a timeline in order to complete this in less than 2 hours, I was going to sort of go off in my own direction with it as a generic spear that just has the rough basic shape as that spear.

I probably spent about 45 minutes adjusting various settings in the procedural texture settings in Lightwave to get the texture I was aiming for. I didn’t focus too much on lighting the scene. It’s just using the generic default light from Lightwave. I didn’t do my usual 30 minute ball point pen drawing tonight, but that’s ok because we spent some time at the mall in Barnes and Noble tonight where I looked at several books and magazines related to 3d modeling and drawing. I’m going to consider that a part of my weekly ‘artist date’ for this week. The ‘artist date’ is a part of The Artist’s Way Process. It involves spending time ‘filling the well’ by doing various things your inner artists guides you to do.

Another part of my ‘artist date’ earlier this week was playing Grand Theft Auto, Vice City for a few hours over the weekend. It’s always a little fun to go and act like a crazy stuntman driver in that game causing all sorts of havoc. Neat way to blow off a little steam.

I’m not super happy about the results here. I got the proportion off a little on this and was a bit distracted too since the tv was on when I was drawing. I was going to skip tonight since I skipped working out tonight due to the weather (tornado watches and warnings earlier this afternoon) but really don’t want to do that. I really need to do at least one drawing a day to get in to the good habbits I need to develop. Ink is not a forgiving medium, but that makes me know that I need to work harder to get it right the first time.

I’ve creaed a 3d model of Kris in Lightwave that I have uploaded to turbosquid. You can find this at http://www.turbosquid.com/FullPreview/Index.cfm/ID/566126?referral=mastermesh

Find out more about Kris weapons at http://en.wikipedia.org/wiki/Kris

I’ve uploaded a new 3d Katana created in Lightwave to Tubosquid. It can be found at http://www.turbosquid.com/FullPreview/Index.cfm/ID/566018?referral=mastermesh. Here’s what it looks like:

This photo of a change machine is now available on Turbsquid at
http://www.turbosquid.com/FullPreview/Index.cfm/ID/550920